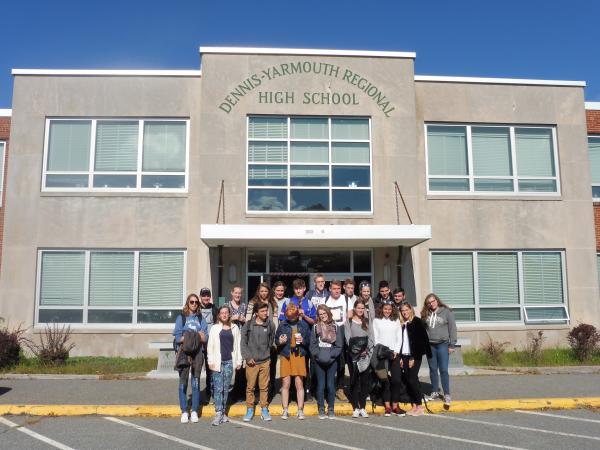 After our American friends had visited us in April, it was now our turn to pack our bags and head to the US for the second part of the exchange with Dennis-Yarmouth Regional High School (DY), our partner school on Cape Cod, Massachusetts. Fourteen students and two teachers embarked on a two-week trip that would first take them to Boston, the capital of Massachusetts. Having arrived there on 25 September in the afternoon, it was time for a quick tour of the city – and a first burger – before going to bed early after a long, but pleasant flight.

On the second day, we followed the path of the Founding Fathers on Boston’s famous Freedom Trail, being led by an 18th-century tour guide who showed us the city of Benjamin Franklin and Sam Adams. After a lunch break that included pizza, more burgers and the famous New England clam chowder (if you do not know what it is, try it!), some adventurous students finished the Freedom Trail and even managed to climb the 294 steps of the Bunker Hill Monument and were duly rewarded with stunning vistas of Boston, before venturing on to Harvard University.

The next day, we were picked up by our friendly driver Mrs G, who took us on a typical yellow school bus to Cape Cod and to the long-awaited reunion with our exchange students at DY. We would spend a complete week on the Cape, which – according to Mrs G – does not start until you have crossed Sagamore Bridge. The DY-famous Schnitzelfest, complete with a creative performance of German songs, was followed by a day-long trip to Plimoth Plantation, the site of the first Puritan colony in the New World, Plymouth Rock and the Christmas Tree Shop that offers a year-long sale of (more or less) useful Christmas- and Halloween-related items. Thanks to our American hosts, who handed out free DY shirts and sweaters, we could experience the Dolphin way by cheering for the DY Dolphins during a spectacular win at the American football game on Friday evening. The weekend was spent in the exchange families and encompassed various activities, from whale-watching and pumpkin-carving to marching band competitions and shopping. But since this is a school exchange, there was plenty of time for us to witness first-hand how American students spend their day in a high school – from the pledge of allegiance in the morning to football and baseball practice in the afternoon – and lessons in between. We even paid a visit to an elementary school to teach a Year 2 class some German words like “grün”, “hören” and “sieben”.

One of the highlights of the trip for many was our day-trip on Cape Cod, where we enjoyed beautiful beaches, picturesque lighthouses and charming villages in the bright sunshine, while learning something about Cape Cod’s fascinating history, geology and wildlife. After a last bonfire on the beach that of course included S’mores (again, if you do not know them, try them!), it was time to say goodbye to our American friends the next morning because we headed to the last stop on our trip – New York City!

The Big Apple greeted us with sunshine and about 28°C (or about 82°F), and a nightly visit of Times Square and its amazing lights showed us why this is the city that never sleeps. The following two and a half days were characterised by a lot of walking, picture-taking and marvelling because we saw many of the famous New York City sights: a tour of the United Nations, Grand Central Station, the Chrysler Building, the Empire State Building (from below and the top), Central Park, the 911 Memorial, the Statue of Liberty, the immigration museum on Ellis Island, Wall Street and the Flatiron Building (to name but a few).

On Sunday evening, however, it was time to board our plane home and when we arrived at Frankfurt Airport almost exactly two weeks after our trip had started, we brought back lots of souvenirs, impressions, pictures and stories to tell. Thank you to our American friends at DY – especially to Ms Colton-Mund – for an amazing time on the Cape! See you in two years! 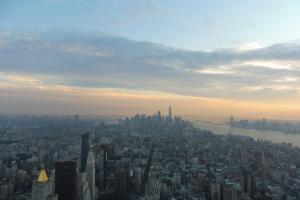