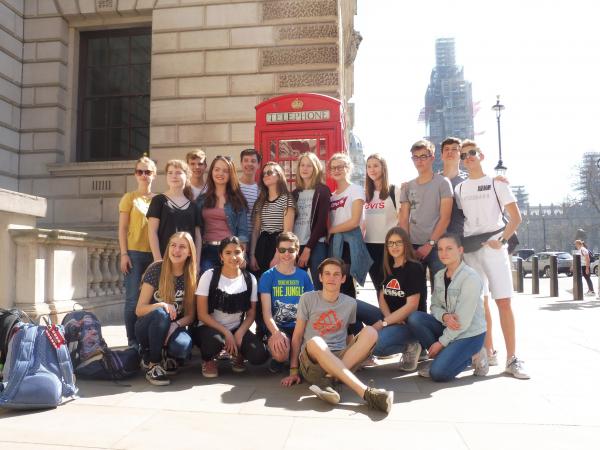 After our English friends had visited us in Alzey in March – with a lot of snow and ice – it was now time to travel to England – with a lot of sunshine and no rain at all! On 18th April at 3.30am we met in Alzey and said goodbye to our parents and drove away. We arrived in Frankfurt Hahn Airport at 4.40am and about two hours later we were in the airplane and our trip really began. But then we had to wait about two hours, so we ate breakfast and played some games. At 6:40 (English time) we arrived at London Stansted, got our suitcases and drove by bus to Luton Airport, where buses from our two exchange schools in Harpenden – Sir John Lawes School and Roundwood Park School – picked us up. After we had arrived at our schools, it was time to say hello to our English friends, to eat some lunch and chat a little bit. After lunch, our partners showed us their school, for example, the school goat at Sir John Lawes or the different buildings where the subjects are taught. Then we joined two lessons and finally went to our exchange partners’ homes. We met the rest of the family and ate a delicious dinner. After that long day we went to bed tired and dreamed about some wonderful things.

The next day, we drove by train to London and were all very excited. So was the weather because that day was the warmest 19th April in England’s history! We arrived in the British capital at around 10 o’clock. The first thing we saw was Westminster Abbey and a little bit of Big Ben. A little bit of Big Ben? Yes, there was a lot of construction work and most parts of the building were hidden. After we had discovered some typical red phone boxes, we took some pictures and tried to fit as many pupils as possible into one box. On our way from Westminster Abbey to Trafalgar Square we passed Downing Street, where the Prime Minister lives. After that we went to Leicester Square and Piccadilly Circus, where we enjoyed our lunch break in the sunshine and bought some souvenirs. After a quick stop in Chinatown, we drove by Tube to the Thames for a boat trip. As we sat on the boat, we passed the London Eye, Shakespeare’s Globe Theatre, London Bridge, the Shard, the Tower of London and Tower Bridge on our way to Greenwich, where we saw many familiar things like the Cutty Sark, Church Street or the Foot Tunnel we had read about in our old English book. We travelled back to London on the DLR, saw the Bank of England and St Paul’s Cathedral and took the train back from St Pancras to Harpenden, where we met our exchange students.

On Friday, we went to St Albans, a little town close to Harpenden, with our exchange students. The teachers gave us some information about St Albans and what to see there. After we had arrived at the famous Clock Tower, we had to find out more about the town in a treasure hunt, which we had to do in groups of four people – two English students and two German ones. The treasure hunt led us through St Albans like a tourist guide because we saw the most popular things there. During our lunch break, the teachers corrected the booklets to check the answer and find a winner. After a little translation exercise we did with our exchange partners, we visited the famous St Albans Cathedral, the longest cathedral in England. While walking through it, we could see the whole history of it since the Middle Ages written and painted on a tapestry! In the early afternoon we could choose between buying more souvenirs and looking at a very old Roman mosaic in a house which had underfloor heating like we have today. After driving back to Harpenden by train, we were welcomed by the mayor of Harpenden in the town hall. She told us that mayors in England usually wear a big chain which shows important aspects of the town. On the Harpenden chain, you can see a picture of Mount Everest because two people from Harpenden helped Sir Edmund Hillary climb the highest mountain on earth for the first time in 1953! After that, we had some snacks and could start our weekend in our exchange families!

Our British weekend started on with some more shopping on Friday afternoon or a typical English tea time. Luckily, it was not a normal weekend in the UK: It was the Queen’s 92nd birthday, the London Marathon was scheduled on Sunday and everybody waited for the new member of the Royal Family to see the light of day! Many host families had planned a day out in London that included a ride on the London Eye, Europe’s biggest Ferris wheel, shopping in Oxford Street or more sightseeing in the capital. Some went to museums to look at famous art while others explored the street markets and tasted London’s multicultural food. The evenings were spent back in Harpenden with sleepovers, barbecues in the garden – yes, it was warm enough for barbecues –, learning to play cards “the English way” or just sharing stories at a campfire. On Sunday, there was a big parade of the scouts and guides of Harpenden. Over 600 girls and boys marched to celebrate St George’s Day – the day of England’s patron saint – all dressed in uniforms and accompanied by bagpipes. The small town was bustling with families, flags, music and ice-cream vans. Not all of saw this spectacle because some of us also made a trip to the coast at Brighton to breathe in some fresh sea air or visited an amusement park. All in all the weekend was a chance for everyone to get to know our host families and their lives even better.

Monday was our school day in Harpenden and so we went to the two different schools to learn more about life in an English school. School always starts with registration, where the teacher checks if all pupils are present and tells them about important events, like tests or field trips. After that, the pupils go to their different lessons, which is different than in Germany because in Germany the pupils have their own classroom in which the teachers “visit” them, while in England it is the other way around. The classrooms are located in different buildings; there is, for example, a Science building or a Languages building. Another difference is of course the fact that the English pupils have to wear school uniforms. We all had different lessons that day, some of which are similar to the ones in Germany – like Maths or P.E. – but there are also some different subjects like Drama. Almost all of us helped in the German lessons, where we talked about Germany or our school lives. During the lunch break, you could either go to the school canteen and eat something there or bring your own food. After lunch, we had two more lessons. Finally we spent some time relaxing in the park in Harpenden, but all of us went to bed really early because we had to get up very early to catch our flight back to Germany!

Over all, it was a very interesting week, where we made a lot of new experiences, learnt a lot, enjoyed the famous English sunshine and made some new friends! Thank you so much to our English friends for an amazing week! I hope we will see you all very soon! 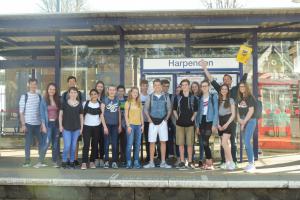 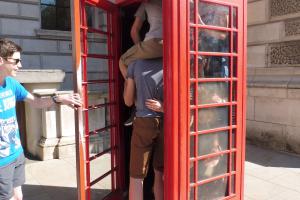 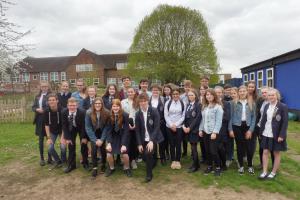